The first game of Andrew Wiggins’ Kansas University basketball career could best be described as “efficient,” coach Bill Self said on Friday night in Allen Fieldhouse following his team's 80-63 victory over Louisiana Monroe. By Gary Bedore 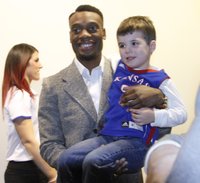 FINAL: KU gets by Louisiana Monroe, 80-63 in foul-fest

Though KU’s defense was shaky throughout, the Jayhawks still managed enough firepower late to pull away from ULM in a 80-63 season-opening victory on Friday night at Allen Fieldhouse.

Tharpe missed the contest after illegally playing in a summer-league game in Chicago a few months ago.

The Jayhawks allowed 12 combined dunks and layups to ULM, a high number that was rarely seen with the 7-footer Withey protecting the rim.

Andrew Wiggins led KU with 16 points on 5-for-9 shooting in a choppy game that was overtaken by ticky-tack officiating. KU made 27 of 43 free throws, while ULM was 18-for-29.

Here’s a look back to some of the action:

• The game turned when: Kansas coach Bill Self marched onto the court to argue jaw-to-jaw with an official about a foul call on Frank Mason with 15:34 left in the second half. After Self somehow avoided a technical foul, the Allen Fieldhouse crowd came to life, and a few seconds later, KU raced down the court for a Tarik Black layup — just KU’s fourth fast-break point of the game — that made it 49-41 and forced a ULM timeout.

• Offensive highlight: Andrew Wiggins once again showed his offensive potential on a baseline move with 12:19 left in the second half, taking a couple quick dribbles to his right before floating in a finger-roll before ULM’s defense could rotate. It’s the kind of tantalizing play that makes you wonder why the 6-foot-8 Canadian isn’t more aggressive off the dribble with the talent he has.

• Defensive highlight: With 9:13 left, Tarik Black poked away a ULM pass for a steal, then Conner Frankamp threw ahead for an Andrew White III layup and foul. A few seconds later, after White made his free throw, Frankamp stole the inbounds pass and put in a layup of his own, capping a 15-5 KU run.

• Up next: KU will take on Duke in the Champions Classic at 8:30 p.m. Tuesday at the United Center in Chicago.