Wiggins floors it against Towson

Subtle isn’t a word that comes to the minds of tongues-hanging spectators when an Andrew Wiggins highlight video plays on the big board. Amazing, freakish, did I really just see that? Did he really get that high above the rim? Nothing quiet about the gifts he flashes on those plays. By Tom Keegan

Kansas University freshman center Joel Embiid had a career-high three blocks, most by a Jayhawk in a game this season, and coach Bill Self thought Andrew White produced off the bench against Towson. By Gary Bedore

If given another opportunity to face No. 2 Kansas University, Towson basketball coach Pat Skerry thinks he might have discovered a way to slow down the Jayhawks. Unfortunately, his master plan would violate one of the most basic rules of basketball. By Matt Tait 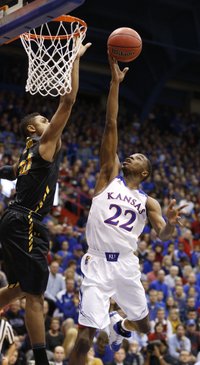 They scheduled a basketball game and a dunk fest broke out.

Behind a fast and furious first half in which the Jayhawks pushed the ball in transition better than at any point during this young season, the Kansas men's hoops squad buried Towson, 88-58, at Allen Fieldhouse and improved to 4-0 overall, 1-0 in the Battle 4 Atlantis classic.

Andrew Wiggins, who scored 14 first-half points on 6-of-7 shooting, led the Jayhawks with 16 points and 7 rebounds (4 offensive) in what turned out to be a very efficient night. No question Wiggins could have scored much more, but given the way the Jayhawks ran in transition and the talent of the opponent, he simply did not need to.

Andrew White III (13), Perry Ellis (10) and Wayne Selden (12) all reached double figures, as well, and the Jayhawks turned the lights out on this one early in the first half, taking a 49-16 lead into the locker room, after closing the half on an 18-0 run.

Many of the Jayhawks first-half points came via the slam dunk as Tarik Black, Joel Embiid, Ellis, Selden and Wiggins each threw down multiple dunks of all varieties.

KU shot 60 percent for the game (44 percent from three-point range) and held Towson to 37 percent while outrebounding Towson, 40-28.

• Offensive highlight: It really isn't fair to pick just one, so we'll go with all three monster dunks that came in a span of 1:34 to kick this one off. The first came from Tarik Black, who picked up a steal near mid-court and then punished the rim with a one-hand rattler over a defender who refused to commit. Seconds later, Wayne Selden hit the rim even harder with a two-handed flush in transition that ended with him raising his head above the rim as he landed. On the next KU possession, Naadir Tharpe found Black for an alley-oop which he caught with one hand and flushed it after fully extending his arm over a Towson defender. The impressive stretch put KU up 11-5 but Towson probably felt like it was 40-5.

• Defensive highlight: Let's keep the theme of a three-for alive, with a series of first-half swats from Joel Embiid taking this category. All three came in different manners. The first was the result of Embiid stepping up to meet a driving Towson player at the free throw line. The second was off of help defense that started the break. And the third came when his man tried to beat him with a baseline drop step that Embiid was having nothing to do with. All three were clean, full-hand swats that merely fueled KU's first-half onslaught.

• Key stat: Transition points. From start to finish, the Jayhawks sprinted up the floor on offense whenever possible and that led to Kansas outscoring Towson 29-8 in fastbreak points (at one time it was 29-2). Much of the relentless pushing of the pace led to dunks, but even when it didn't KU typically got to the free throw line or got a good look at the rim. If these guys can comfortably play like that night in and night out, they're going to be scary for nearly everyone they face.

• Up next: The Jayhawks head for paradise and continue play in the Battle 4 Atlantis challenge when they face Wake Forest at 2:30 p.m. on Thursday (Thanksgiving Day) in Nassau, Bahamas.