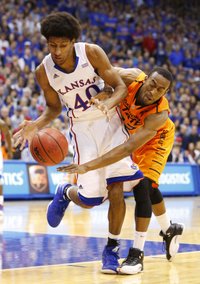 Images from Saturday's game against Oklahoma State at Allen Fieldhouse.

Cowboys: It 'doesn't get any better' than breaking road skid at Allen Fieldhouse

KU coach Bill Self talks after loss to Oklahoma State

Point-guard play becomes more important in mid-March, when Oklahoma State will be in good hands with Marcus Smart at the controls. But what will happen to Kansas, Journal-World sports editor Tom Keegan asks. • Box score• Bill Self postgame audio

Trailing 83-80 with seven seconds left, KU had one last chance to tie, but point guard Elijah Johnson lost the ball on the dribble and turned it over.

OSU led by as many as 14 in the first half before KU stormed back to take the lead early in the second half.

KU led late before turnovers doomed it down the stretch. The Jayhawks finished with 16 turnovers, compared to 13 for the Cowboys.