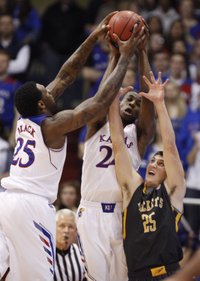 There can’t be many things more frustrating for a visiting coach at Allen Fieldhouse than watching his team play darn near exactly the way he hoped it would and still come out on the losing end. Toledo coach Tod Kowalczyk knew that feeling all too well following Monday’s 93-83 loss to the 16th-ranked Jayhawks, and he had very few negative things to say about his team’s showing. By Matt Tait

Tom Keegan on the Kansas University basketball team's point guard play: "Point guard doesn’t need to be KU’s strongest position, but it can’t be a liability either, and recent progress from both Tharpe and Mason is an encouraging sign for the young, talented Jayhawks."

Kansas University basketball coach Bill Self cited one disturbing defensive statistic as he peered at the stat sheet following Monday’s 93-83 victory over Toledo in Allen Fieldhouse. By Gary Bedore

Perry Ellis scored 21 points (three off a career high) and grabbed a career-best 11 rebounds in the (9-3) Jayhawks’ 93-83 victory over previously undefeated (12-1) Toledo. It marked the sophomore forward's second career double-double and triumphant return from a scary injury suffered against Georgetown.By Gary Bedore

It took a half for the Kansas University men's basketball team to gain the upper hand, but once it did there was no turning back in a 93-83 victory against previously unbeaten Toledo at Allen Fieldhouse.

The Jayhawks and Rockets battled back and forth for much of the first half but a late surge by Kansas put the Jayhawks up 43-36 at halftime and the Jayhawks added to that lead throughout the second half, despite the Rockets' refusal to quit.

• The game turned when: The Jayhawks went inside. KU out-rebounded the Rockets 25-12 in the first half and outscored Toledo 28-12 in the paint. Those numbers evened out a bit as the game went on, but the Jayhawks were clearly the superior team around the rim.

• Offensive highlight: There were a few monster dunks (an alley-oop to Wiggins and a one-handed rim-rattler by Embiid come to mind), but there wasn't a better offensive play in this game than the and-one, finger roll by Wiggins midway through the first half that put KU up for the first time. After driving hard to the rim and absorbing a foul, Wiggins flicked the fingers on his left hand and that sent the ball up to the rim, where it rolled around and fell through. After the timeout, Wiggins hit the free throw to complete the three-point play and send Kansas on its way.

• Defensive highlight: With a little more than 14 minutes left in the second half, Toledo's Julius Brown drove to the rim and saw Joel Embiid closing in on him. Rather than go up on the front side of the rim, where Embiid surely would've blocked it, Brown tucked it, slipped under the rim and tried to put it up on the other side, but Embiid blocked it there anyway. That's a move that's as old as time and still works a lot. But Embiid made sure it didn't on this one.

• Up next: The Jayhawks will wrap up their non-conference schedule at 3:30 p.m. Sunday at home against San Diego State.