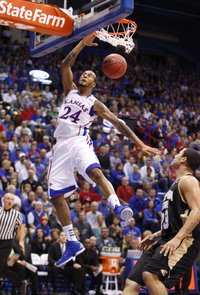 Notebook: Elijah Johnson starts on bench after showing up late to class

Kansas University senior point guard Elijah Johnson did not start Tuesday’s exhibition opener against Emporia State. “Elijah was substantially late to a class today. He knows the deal. (It’s) not a big deal,” Self said.

Emporia State men's basketball coach Shaun Vandiver knew when he saw the starting lineup for Tuesday's exhibition contest with Kansas University that his undersized squad would have its struggles. The Jayhawks outrebounded the Hornets, 43-23, including a 13-7 advantage on the offensive glass. By Matt Tait

Opinion: Red-shirt freshman Ben McLemore jumps but nowhere near as high as his ceiling

To watch red-shirt freshman Ben McLemore play basketball is to wonder just how his ceiling is as a player. His put-back dunk was the highlight of the night for Kansas, Journal-World sports editor Tom Keegan says.

Behind 15 points on 5-of-5 shooting from freshman forward Perry Ellis, the Kansas University men’s basketball team knocked off Emporia State, 88-54, in its first exhibition game of the 2012-13 season.

"He did really well," KU coach Bill Self said. "He just naturally gets the ball in the basket."

The Jayhawks were sluggish in the game’s early minutes, falling behind 10-4 and, later, 14-12 as deep as eight minutes into the first half. But KU’s size, speed and deep bench sparked a 30-7 run to close the half and, by the break, the Jayhawks had doubled up the Hornets and were well on their way to the run-away victory.

Sophomore Naadir Tharpe was a surprise starter for the Jayhawks, taking the place of Elijah Johnson, who did not start because he was "significantly late to a class" on Tuesday, according to Self. Tharpe scored all eight of his points in the first half, but Johnson eventually got into the act, as well, finishing with 12 points and five assists on 4-of-11 shooting, including 2-of-8 shooting from three-point land.

Several Jayhawks made their unofficial Allen Fieldhouse debuts in this one: Ben McLemore (11 points and 6 rebounds in 26 minutes) and Jamari Traylor (6-4-14), two players who spent the 2011-12 season with the team as partial-qualifiers but were not eligible to play, looked strong, and Landen Lucas added six points and nine rebounds in 12 minutes.

"I thought we did some good things," Self said. "We tried hard and looked pretty athletic."

Here’s a quick look back at some of the action.

• The game turned when: Kansas ripped off a 20-1 run, which included a 12-0 spurt, that turned a 14-12 lead for Emporia State into a 32-15 lead for the Jayhawks. The run featured back-to-back three-pointers from surprise starter Naadir Tharpe as well as back-to-back treys from senior Elijah Johnson and freshman Ben McLemore. KU led 42-21 at halftime and cruised home from there.

• Offensive highlight: With 10:42 to play in the game, senior guard Elijah Johnson elevated for a three-pointer from the top of the key that missed to the left. The bounce, however, hung in front of the rim, allowing freshman Ben McLemore to fly down the lane for the follow-dunk that delighted the Fieldhouse crowd.

• Defensive highlight: With 15:36 to play in the second half, and following a timeout, freshman forward Jamari Traylor jumped into a passing lane and picked up one of his four steals. He followed it up with a two-handed, high-flying rim-rattler that won’t do anything to quiet the comparisons to Thomas Robinson.

• Key stat: As expected, the Jayhawks outrebounded the Hornets, 43-23, in this one, including a 13-7 advantage on the offensive glass.

• Up next: The Jayhawks will close out their exhibition schedule Monday, Nov. 5, when they take on Washburn at 7 p.m. at Allen Fieldhouse.