It might not have been a career night for Baylor guard Brady Heslip in the box score, but it definitely was as important a night as he ever had experienced.

Final, not MU, on KU’s minds

There will be no third meeting between Kansas and Missouri this college basketball season ... unless the squads meet in the NCAA Tournament.

Nothing about the way the teams looked sharing the Sprint Center court made it seem as if the guys who lost were the ones who won the conference and the guys who won were seeded fourth after finishing four games out of first place during an 18-game schedule.

Jayhawks most disappointed in ‘D’

Kansas University guard Conner Teahan was honest when asked what contributed most to his team’s poor defensive effort Friday against Baylor. “I guess airheadedness,” the senior said following KU’s 81-72 loss in the Big 12 semifinals. “I know that there were times where people were not knowing what defense we were in or what we were doing — like, ‘Are we trapping the post or not trapping the post?’” 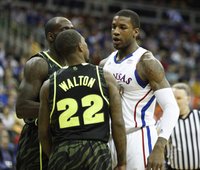 Baylor's Brady Heslip hit two critical three-pointers in the final 2:05, helping Baylor hold off Kansas in an 81-72 victory on Friday night in the semifinals of the Big 12 tournament in Kansas City, Mo.

The Bears answered with a 25-12 spurt to end the game, which included Heslip's threes that pushed BU's lead from three with 2:03 left to seven.

KU (27-6) will learn its destination in the NCAA Tournament on Sunday.