Bill Self said he “loved the atmosphere” at Saturday’s Kansas-Missouri basketball game at Mizzou Arena.

When a few Missouri students ran onto the court after Saturday’s game, MU guard Kim English waved his arms, trying to get them to go back to their seats. There was a reason, he said.

Kansas coach Bill Self talks to reporters following the Jayhawks' 74-71 loss to Missouri on Feb. 4, 2012. 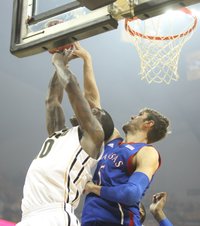 KU had one last chance to tie it at the buzzer, but a desperation three by Elijah Johnson only hit backboard.

Marcus Denmon led Missouri with 29 points on 10-for-16 shooting.

KU was led by Thomas Robinson, who posted 25 points and 13 rebounds. Nineteen of his 25 points came in the second half.