For the second time in two games, someone on the Kansas University men’s basketball team tried to use intimidation tactics to rattle an opponent. 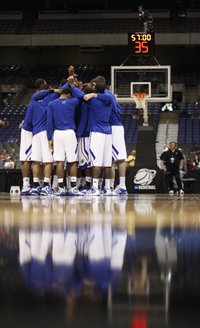 Kansas made just 2 of 21 three-pointers (9.5 percent), falling 71-61 to 11th-seeded VCU on Sunday afternoon at the Alamodome in San Antonio, Texas.

"It's a disappointing day, obviously. We're crushed," KU coach Bill Self said. "But also, I think at the end of the day, we tried real hard and just came up empty against a team that was better than us today."

Marcus Morris led KU with 20 points on 8-for-19 shooting with 16 rebounds. Tyshawn Taylor added 14 points, while Markieff Morris had 13 points and 12 rebounds.

KU fell behind 39-21 in the first half before closing to within two with 13:13 left in the game. The Jayhawks didn't get any closer.

"Probably one of the poorest shooting nights we've had as a team," KU guard Tyrel Reed said. "But credit to VCU. Our shots weren't falling."

The Jayhawks made just 22 of 62 shots for 35.5 percent, their lowest field-goal percentage in the last two seasons. The team's 9.5 percent three-point shooting also was its worst outing in the last two years. 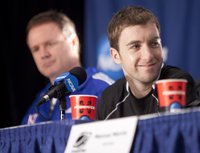 Marcus Morris says he doesn't try to be intimidating, and that he doesn't think what he and his teammates do should be considered trash talk. “I don’t try to intimidate nobody. Maybe it’s just because of the way I look or my tattoos. I like the way I look.”

VCU's Bradford Burgess says the game against Kansas will be "like a great challenge ahead of us." He said Kansas is the bet team they'll have faced all season. Senior Joey Rodriguez says he and his teammates know KU is a great team, but it's a game they're looking forward to.

Markieff Morris talks about his close bond with his brother Marcus

Markieff Morris says he and his brother aren't worried about whether they'll come back this year. They're worried about what's in front of them right now. “We're really focused on trying to win a national championship."