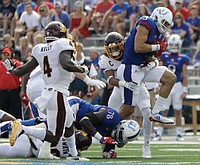 A “tough sucker,” according to his head coach, junior Kansas receiver Steven Sims Jr. did all he could to try and get healthy enough to make an impact Saturday against Central Michigan. By Benton Smith