Coming out of its bye week, the Kansas football team endured the same problems that it had prior to Saturday’s 65-19 loss to Texas Tech at Memorial Stadium. By Bobby Nightengale 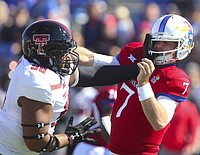 View a gallery of images from Saturday's game between the Jayhawks and Red Raiders at ...

After a 65-19 home loss to Texas Tech on Saturday, Kansas football coach David Beaty discussed the problems on both sides of the ball, using quarterback Carter Stanley throughout the second half and why he doesn't describe himself as disappointed ...