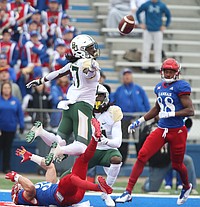 View a gallery of images from the Jayhawks' home game against the Bears on Saturday ...

In a game the Kansas football team needed desperately to win, the Jayhawks’ defense spent the majority of what proved to be a 38-9 victory for previously winless Baylor without a key member of its secondary. By Benton Smith