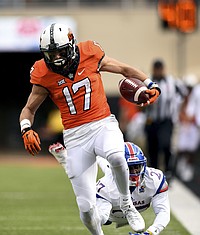 The moment the University of Kansas football team’s season ended with a 58-17 pasting at the hands of No. 18 Oklahoma State, athletic director Sheahon Zenger sent out a statement in support of head coach David Beaty. By Benton Smith

The Kansas Jayhawks' 2017 season comes to a close at No. 18 Oklahoma State, where KU will have to score a massive upset to avoid a winless year in the Big 12.