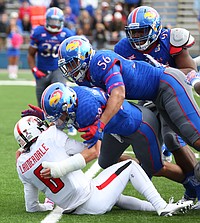 Kansas University punter Eric Kahn got one chance to hang on to his starting job during Saturday's 30-20 loss to Texas Tech at Memorial Stadium. And when that kick sailed just 23 yards after KU's second offensive possession of the game, KU coach David Beaty elected to look elsewhere the rest of the way. By Matt Tait

With the Oakland Raiders having their bye this weekend, former Kansas linebacker and NFL rookie Ben Heeney was back in Lawrence for the first time this season to take in Saturday's game, a 30-20 Jayhawks loss to Texas Tech.

After three straight sub-par efforts on the ground, the Kansas running game got back on track Saturday during a 30-20 home loss to Texas Tech.

True freshman Ryan Willis made his share of mistakes in turning what had the potential to turn into a more-of-the-same blowout loss into a game, but the way he led Kansas University’s winless football team back from the depths Saturday in a 30-20 loss to Texas Tech in Memorial Stadium is what will energize teammates through another week of grueling practice.  By Tom Keegan