RB goes for 91 yards in setback

Kansas University’s football team welcomed junior James Sims back to the huddle Saturday, and his return could not have come at a better time.

A few seconds after reporters were asked if they had any final questions, Northern Illinois coach Dave Doeren spoke up himself. 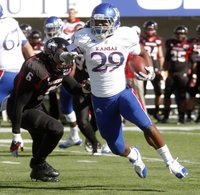 Another week, another loss, another day Kansas University senior quarterback Dayne Crist found himself answering questions about his role from the wrong end of the game’s pivotal fourth-quarter play.

Kansas blew a 10-point fourth-quarter lead, giving up 17 unanswered points as Northern Illinois rallied for a 30-23 victory on Saturday at Huskie Stadium in DeKalb, Ill.

KU's Tyler Patmon intercepted a Jordan Lynch pass an returned it for a touchdown with 14:33 left, but almost nothing went right for KU after that.

The Jayhawks had a holding penalty on the extra point, then Ron Doherty missed the 30-yard attempt wide right.

On NIU's next play from scrimmage, Lynch jump-passed to Martel Moore for a 65-yard TD pass.

Following a Mathew Sims 44-yard field goal that tied it with 7:58 left, Leighton Settle finished a 53-yard drive with a two-yard TD run to give NIU the lead.

In his first game back from a three-game suspension, KU's James Sims rushed 18 times for 91 yards and two TDs.

Dayne Crist finished 10-for-26 passing for 147 yards with no touchdowns and no interceptions.