It looks as if the days of Kansas University playing in the same conference as Oklahoma and Oklahoma State are numbered. Based on the pass defense’s performance in Saturday’s season opener, it’s evident the Jayhawks already are not in the same league as the Sooners and Cowboys.

Preoccupied with preparing for his team’s 42-24, season-opening victory against McNeese State for most of the day Saturday, Kansas University football coach Turner Gill took time out after the game to comment on the passing of legendary KU coach and supporter Don Fambrough, who died Saturday at the age of 88.

The perfect opening-game scenario for Kansas University’s true freshmen must have looked something like this: Darrian Miller runs hard all night and has every carry but one go for positive yardage; Tony Pierson picks up a touchdown and delivers a few electrifying runs; and JaCorey Shepherd, the wide receiver teammates said all summer was nearly unguardable, picks up a TD in his first game. 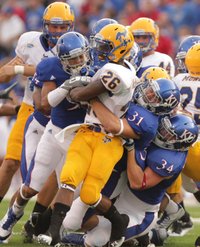 The Kansas football team showed off its revamped rushing game on Saturday, posting 55 carries for 301 yards (5.5 yards per carry) in a 42-24 victory over McNeese State at Memorial Stadium.

It was the first time KU surpassed 300 yards rushing since the 2008 season.

James Sims led KU, carrying it 19 times for 104 yards and a touchdown.

In their first collegiate games, Tony Pierson added five carries for 73 yards and a score, while Darrian Miller had 13 rushes for 63 yards.

Jordan Webb was efficient at quarterback, completing 7 of 10 passes for 146 yards and three touchdowns.

Two of those scores went to true freshman JaCorey Shepherd, who had three catches for 107 yards.

Defensively, Steven Johnson had 15 tackles, while Toben Opurum had 11.

After the game, KU coach Turner Gill said that receiver Daymond Patterson had a groin injury and, at this point, was doubtful for next week's game.