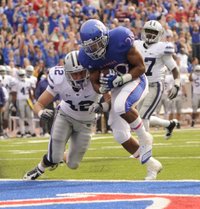 Jayhawks: Blown coverage at end of half 'unacceptable'

It was only a single play, but it might have been the one that shifted the momentum to Kansas State for good in its 59-21 victory over Kansas on Saturday.

Candidates for Game Balls and Gassers ...

One week after being carted off the field with a scary neck injury that left him temporarily unable to move his arms and legs, senior center Jeremiah Hatch started Saturday's loss to K-State at his regular position.

KU athletic director Sheahon Zenger on football program: 'We will get this thing fixed'

Want to know just how wide the gap is between the football programs at Kansas University and Kansas State? Look no further than the two-minute sequence that spanned the end of the first half and the beginning of the second on Saturday at Memorial Stadium.

Sheahon Zenger, this is your mission: Find a way to get the Kansas University athletic department out of the financial pressure your predecessor, Lew Perkins, put it in, in part because he believed in giving coaches everything they needed to succeed with little regard for how much it cost.