Two years ago, after Mark Mangino had just coached his final game for Kansas University with a loss to Missouri and a seven-game losing streak, he spoke into a microphone on the table in front of him. His last words after eight years on the job: “I will tell you that I may be one of the more pleasant people to deal with in college football. Trust me.”

Kansas University football coach Turner Gill said after Saturday’s 24-10 loss to arch-rival Missouri that he believed he would be back at Kansas for a third season in 2012.

If Saturday’s 24-10 loss to Missouri at Arrowhead Stadium was Turner Gill’s final game in charge of the Kansas University football program, the second-year head coach did not stray far from what people have come to expect.

Bradley McDougald, KU's best player in the second half of the season, returned an interception 57 yards for a touchdown and had eight tackles, six solos, one for a loss.

Steven Johnson best player of 2011 season, according to ratings 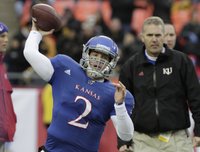 FINAL: Missouri dominates second half in 24-10 victory over KU

Missouri scored 21 unanswered points in the second half, rallying to take a 24-10 victory over Kansas on Saturday night in the season finale at Arrowhead Stadium in Kansas City, Mo.

The Jayhawks — as has been a theme most of the season — collapsed in the third quarter. Following a bad punt snap by Tanner Gibas, MU took advantage of a short field with a Kendial Lawrence four-yard TD run.

Wes Kemp added a 25-yard TD pass with 5:34 left in the third quarter, then Marcus Lucas contributed a 53-yard TD reception on the first play of the fourth quarter.

KU once again struggled offensively, as through three quarters, the Jayhawks had 41 plays for just 79 yards. The Jayhawks finished with 137 total yards.

Quarterback Jordan Webb finished 9-for-20 for 60 yards with two interceptions. No KU player rushed for more than 35 yards.

Greg Brown and Tyler Patmon also had interceptions for the Jayhawks.